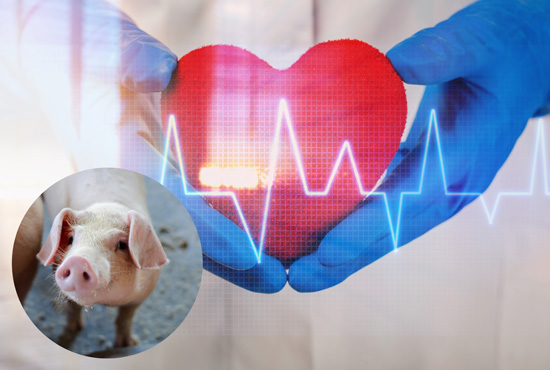 Last month, transplant surgeons at the University of Maryland landed in unchartered territory by announcing the first successful pig-to-human heart transplant for a patient with end-stage heart disease.

"It was either die or do this transplant," said the patient, David Bennett, who received life-support for six weeks before the heart surgery through an extracorporeal membrane oxygenation (ECMO) machine[1]. "I want to live. I know it's a shot in the dark, but it's my last choice."

An experimental compound developed by Bermuda-headquartered Kiniksa Pharmaceuticals, the unexpected addition of cocaine,[2] and other conventional therapies were also used to stifle the body's immune response. Final operative and outcome results are not yet published in peer-reviewed journals, but the patient was reportedly "doing well" three days post-procedure.

"This breakthrough surgery brings us one step closer to solving the organ shortage crisis," Griffith said in the press release. "There are not enough donor human hearts available to meet the long list of potential recipients. We are cautious but also optimistic that this first-in-the-world surgery will provide an important new option for patients in the future."

Despite optimistic headlines crossing borders, whether the success will last and - more importantly - be replicated over time to replace conventional heart transplants is unknown.

Heart transplants - a surgical operation where the patient's diseased heart is replaced with a donor's healthy one - are for end-stage heart failure (HF) patients with severe symptoms that persist despite optimal medical treatment (OMT).

After exhausting all other options - including pacemakers and new drugs - the medical team decides on a heart transplant once confirming the patient's eligibility for the operation that lasts between four to six hours.

Although heart transplants transcended into standard-of-care for end-stage HF patients since its first operation in 1967, problems related to the shortage of human donor hearts and donor-recipient heart incompatibility often bar a swift transition from consultation to the operating table. The waiting period can span months and sometimes years.

The supply of transplant organs comes from brain-dead donors, with family consent playing a complicated role. Although heart transplant figures have grown steadily over the past 55 years, demand for donor hearts still greatly outweighs supply, especially with the rise of heart disease in the modern era.

According to the US federal government, about 110,000 Americans are waitlisted for an organ transplant, with more than 6,000 patients on the waiting list dying each year[3].

In Korea, data from the Ministry of Health and Welfare shows about 36,000 waitlisted patients in 2020, and the domestic organ shortage has worsened in recent years with a 25 percent drop in donors compared to the year prior.

Considering the complexity of end-stage HF treatment and the shortage of organs for conventional heart transplantation, using animal hearts for transplants - known as heart xenotransplantation - offer a narrow corridor of hope for terminally ill patients.

Although still experimental, heart xenotransplantation - if consistently safe and reproducible - could tout considerable benefits over conventional transplants. Using pigs, in particular, could secure an unlimited supply of organs to expedite the time-to-surgery for waitlisted patients.

But the biggest problems revolve around the question mark of durability, an issue that has surfaced repeatedly in the long and rocky history of xenotransplantation.

In the same year, James Hardy, MD (University of Pennsylvania School of Medicine, Philadelphia, USA) attempted the world's first modern heart xenotransplant. Hardy transplanted a chimpanzee's heart into a semi-comatose patient who had severe atheromatous vascular disease and double-leg amputations. The patient, who would not have cleared modern requirements for transplantation, died within two hours.[4]

Scientific and technological progress, however, drastically cleared traditional hurdles and paved the winding way forward for the recent heart xenotransplantation, marking a new starting line in the field.

Although non-human primates (NHPs) - such as monkeys and baboons - are phylogenetically most similar to humans, their ability to produce only one offspring and endangered status have raised ethical concerns.

Meanwhile, miniature pigs weighing 80 to 120 kilograms can be bred systematically to produce up to eight litters per delivery[7], allowing researchers to tap into a virtually inexhaustible supply used for human food.

By cleaving genetic material with modern CRISPR-Cas9 technology, largely attributed to two recipients of the Nobel Prize in Chemistry in 2020, scientists can knock out certain pig genes, such as galactose-alpha-1,3-galactose, known to trigger hyperacute rejection.

The engineering of these PERV-free, "alpha-al" pigs marked an epoch in the field. At least four biotech firms, including Revivicor, Makana-Recombinetics (Minnesota, USA), Qihan Biotech (Hangzhou, China), and eGenesis (Massachusetts, USA), have since modified up to 40 genes in pigs.[8]

Although genome editing helps cut the risk of zoonotic infection, medical therapies are also required to reduce the chances of both immune rejection and over-immunosuppression.

These immunosuppressants, paired with several medical therapies, are crucial components that raise the chances of transplant success. The perfect combination of drugs is still unknown, and investigations are ongoing.

All progress aside, science is but one piece of the puzzle; solving the enigma of xenotransplantation would likely require amassing favorable progress from multiple fronts, including ethical, social, regulatory, and legal.

"Baby Fae's case where a baboon heart was transplanted into a neonate stimulated debates on self-identity," Chang-ho Yoon, MD (Seoul National University College of Medicine, Seoul, South Korea) and colleagues wrote last year in the Progress in Retinal and Eye Research[9]. "Psychosocial aspects might include a distorted self-image about acquiring animal features as reported among allotransplantation patients who fantasize about receiving physical characteristics from the donor."

"These issues may be affected by the individual's cultural background and public attitude of their communities," Yoon said. "But self-identity is not generally compromised by xenotransplantation, [with reports showing] previously held erroneous notions about non-human sources in their bodies from porcine islet cell transplantation were abandoned after the procedure."

As for public support, ratings have hovered from low to moderate, with most surveys showing no "overwhelming" support. Scores also fluctuate between groups like medical professionals, university students, and waitlisted patients.

According to Yoon, surveys from 23 countries showed less than half thought xenotransplantation was morally acceptable (41 percent), and only around half said it was potentially useful.

Ethical concerns, too, are prominent. Rare problems of zoonosis where the recipient could spread porcine infection to others after the surgery have been unresolved, if not exacerbated, by the zoonotic COVID-19 pandemic.

The concept of xenotransplantation has also consistently triggered protests from animal groups. People for the Ethical Treatment of Animals (PETA) slammed the recent operation as unethical and dangerous "Frankenscience" that wastes resources researchers could have funneled to "actually helpful" human organ research.

"Animals aren't toolsheds to be raided - they're complex, intelligent individuals," the PETA statement updated on Jan 23 read[10]. "Pigs and other animals used for xenotransplantation are genetically engineered and subjected to a lifetime of confinement and unimaginably painful procedures before being killed."

"The risk of transmitting unknown viruses during such procedures is real and, in a pandemic, should be enough to end these studies forever," the statement read. "Xenotransplantation is nothing more than a vanity project that seeks to grab sensational headlines."

These underlying scientific, medical, social, and ethical concerns have called for strict domestic and international regulatory framework. The World Health Organization (WHO) acknowledges xenotransplantation only under national regulatory control, and the stronghold of the domestic governing body varies by country[11].

In Korea, multiple agencies, including the Ministry of Health and Welfare, Korea's Centers for Disease Control and Prevention (KCDC), the Ministry of Agriculture, Food and Rural Affairs, and the National Bioethics Committee oversee the complex xenotransplantation process.

The US Food and Drug Administration (FDA), which acts as the regulatory body for xenotransplantation products and clinical trials in America, granted emergency authorization for the recent operation through its expanded access pathway. The approval greenlights compassionate use of experimental procedures and drugs for terminally ill patients without other treatment options.[12]

Although the FDA's exceptional approval - issued in "hopes of saving the patient's life" - mediated the historic operation, such decisions are rare and not universal throughout the world. And for patients with serious or life-threatening conditions such as end-stage heart failure, the recent breakthrough provides little clarity to an opaque future.

As the initial lights and excitement of the US xenotransplant fade, the next steps are dimmed once again and spurring examination of the meandering path of end-stage heart failure treatment to illuminate the way forward.

The late Keith Reemtsma remarked that the story of Daedalus and his son Icarus in Greek mythology was one of the first allusions to xenotransplantation.[13] Daedalus warns Icarus - bearing man-made wings of feather and wax - to not fly too close to the sun nor too close to the sea, guarding against both hubris and complacency.

As was for Icarus, these words of caution could advise the field of modern xenotransplantation and help innovators shield against the pitfalls of ambition while advancing treatments for patients with advanced heart disease.